This is what I got, so far.

Hoping I have time to render some effects. Here’s the notes that I just took at lunch. Thanks to the waitress for supplying the scrap paper and pen. 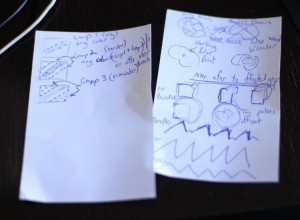 Here’s a screencap of the 6 layers of audio. Was fun to do a few different zombie types… and, of course, the eating sounds.

On August 20th, 2011, Vancouver was plagued by an army of the undead. I managed to survive the claws of the maggot invested fiends with my recorded footage.

Here’s some footage that I put together for fun.

World War Z: An Oral History of the Zombie War by Max Brooks
My rating: 4 of 5 stars

A commentary of the societies around the globe. What happens when our systems are stress tested? How would we survive and reconstruct after a zombie apocalypse?

If you’re curious, this is a must read. If you don’t really care, then read it anyway!

View all my reviews

Zombies chomping (and being chopped) in reverse, for Zombie Island trailer. Houdini was used for rigging, animation, effects and rendering. A nice score for Toronto based SideFX software!

Zombies in the Cottage of Doom

Back in 2003, Evil Dead: A Fistful of Boomstick was released on the XBOX 360. I saw only bits and pieces if, but the reviews seem to side with what I saw…   some awesome voice work by Bruce Campbell, inside of a disappointing game.

If you love the concept of being trapped inside of a cottage, with unlimited waves of undead, you must checked the open-source game project Cottage of Doom.  The graphics are something you might haven’t seen in a decade, but the gameplay is great.  The creator is now working on an update called “Deadrock“, though I expect it might be awhile before we see anything since he’ seems busy with Eufloria.

Call of Duty: World At War

Staring out of a boarded up window as dead nazi’s stumble in from the fog. With the volume set properly, your guaranteed to jump.

I’m sure that most will be playing Left 4 Dead 2, but don’t forget to checkout some of these other pieces of zombie flavor.