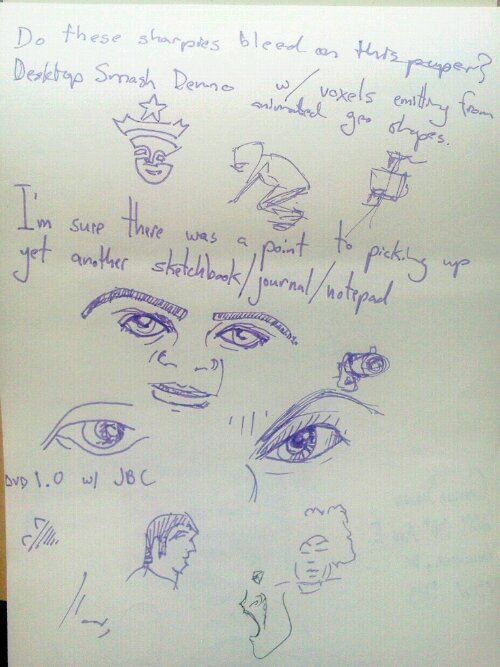 First Moleskin is almost full. I am hooked. Here is page 1 from October, 2010.

Real quick, I wanted to point out the many recent uses of voxels demonstrated at Siggraph. I can’t help it, but I get pretty excited every time I hear about voxels. Even the developer at Atomontage states that we need a voxel “revolution”, and I couldn’t agree more.

Apparently Blue Sky’s “Rio” used Voxels for terrain and the rendering of large crowds. I hope the talk is released soon so I can see the details, first hand.

I was made aware of a game engine called Atomontage, which uses voxels [thx Ruslan].  In the video below, you can see the potentials of (for example) truly destructible terrain, as the user unearths rocks from the sand or strips the plaster from the walls, revealing the bricks underneath.

SideFx’s release of Houdini 11.1 allows for the integration with Sony Imagework’s open source project, “Field3D“, a format for working with 3D voxel data.

It’s been awhile since I last wrote anything about voxels, and I’m cooking up another update.  In the meantime, I just had to share this beauty of a vid.

Dear Voxel, Where’ve Ya Been?

Anyone remember the voxel?  Gamers used to remember voxels from the Voxel Space engine that was used in Comanche: Maximum Overkill and Delta Force. Or maybe there’s some gamers out there that played Outcast?  (maybe?)

In any case, it looks like voxels are not dead…   but taking a little vacation.  It’s only a matter of time till someone exploits the hidden potential.  Real destructible terrain w/ density!  Hellooooo?  Well, one person seems to have figured it out and disguised his tech demo as a game called Voxelstein 3D.  I can’t tell you what hope this game gives me.  Imagine not just blowing chunks off off buildings, in pre-cut peices… but actually being able to carve into terrain.

Seems like the medical field hasn’t let this technology unused.  A few Siggraph’s back I was able to get a demo from one of the software engineers of this intuitive application, but on ATI hardware.  He moved points around to adjust the density and appearance of those densities in order to zero in on the skull and (with a little tweaking) the brain.

Lucky for me, Houdini has voxels in it…  voxel fluids.

Looks like there’s still some money to be made in software & hardware using voxel technology.

Still wondering “What are voxels“?  Well Wiki seems to have the usual depth, including a list of games that used the technology, like Crysis & Worms 4 Mayhem… ?  Ok, now we need an update to Scorched Earth, but with voxels.  Mmmm  MMmm good.