Hey YEG, that was a pretty cool open data Hackathon. The potentials demonstrated by the participants in that room had me shivering with excitement. So many useful and brilliantly simple ideas.  The future is bright.

Need some evidence of the potentials of open data? I recommend starting with Jennifer Pahlka’s TED talk on Code for America.

“…platform for people to help themselves and help others.”

At Saturday’s Hackaton, I had the pleasure of meeting some incredible people, super-geeks. I appreciate techs that seem to be almost immune to any technological aversion.

So, back to Saturday’s event…

While at the all-day hacking festival, something was shared with me… and it’s only just now hitting me.

We love this open data. It’s great and more and more of this public/government data is becoming open and available for everyone to plug into.

However, I was told what happens whenever one of these independent volunteers comes up with a great way to present and grant access  to these goldmines of information: The government responds by rebuilding the information tool internally, themselves. This results in the indie project being unsupported, and fading away, unfunded and unappreciated. There’s something about this that doesn’t make sense to me.

It’s not really about “fairness”. It’s about failing to recognize that the idea came from a method. Ideas like this usually grow from a fertile garden of even MORE ideas. It’s about encouraging this open data culture, speeding it’s development.

Finally, just wanted to highlight Trystal.net, which is based on the speedy node.js, this text editor is… well…  how does one glorify a text editor? Well, after playing around with it for a bit, I’m pretty excited about the direction it’s going. Document writing in a more procedural fashion. No more scrolling through pages of documents and re-organizing content is super simple with tried and tested keyboard shortcuts. Super efficient document creation / conversion. Looking forward to seeing where Terry takes this.

Don’t take my word for it.  If you are feeling adventurous, create yourself an account and Open file -> my files -> home … then play around a bit after reading some of the docs. It won’t take more than a few minutes to get comfy with this way of document creation.

Time to upgrade the video card and it’s been a tough decision.  “Professional 3D card” like nVidia’s Quadro versus a consumer grade gaming card like the GeForce cards.  Is there a difference?  There’s a lot of debate out there, but it ultimately depends on the budget and how the card is going to be used.  I’m a professional 3D animator who does quite a bit of character work in packages like Maya, but I also do some FX work in Houdini and some digital sculpting in 3D Coat.  Houdini and 3D Coat can take advantage of the CUDA cores and according to this thread in the 3D Coat forums, the CUDA performance has been degraded in recent releases on the GeForce cards. They seem to be settling on the Geforce GTX 580.

After much research, I’ve decided to replace my Quadro 600 card.  It has been reliable and doesn’t consume much power, but the frame-rates are killing my eyes.  I’ve opted for the Geforce GTX 580 w/ 3GB of RAM.  Cost me $260, used on Amazon.   The other option I was considering was the Quadro 4000 w/ 2GB of RAM…  but I would have had to talk a seller down from $450.  Considering the benchmarks and the stats below… well… I’m going to take a gamble on a “non-professional” card.

Here’s some links to some of the Quadro vs GeForce debates.

With 2 desktop computers and 2 laptops with another desktop being added to the mix, I felt it was time to cut down on these wireless signals. My motivation is part security and part efficiency… with a dash of paranoia.

While looking through old electrical gear, I found a Linksys WRT54G v8 wireless router. Bells started ringing in my head.

I remembered reading an article on some custom firmware that allowed for routers to be turned into repeaters or a wireless bridge. When I looked it up, it turns out that the Linksys WRT54G v8 was a perfect candidate for this DD-WRT firmware.

There’s a few Youtube videos out there that will help you through the process, which seems intimidating, but really isn’t that complex. And for those preferring an text & image based tutorial there’s the bridge article by WIFI Planet.

For my particular router (the v8), I only needed to:

1. Download the files from the DD-WRT Router Database (for the heck of it, grab em all). http://www.dd-wrt.com/site/support/router-database
2. In the admin panel of my Linksys router apply the vxworkskiller firmware. After applying this firmware, your router can only be accessed from a computer via a static IP and FTP.
3. Used the included tftp.exe file to upload the micro_generic firmware to my router.
4. Rebooted the router again and then inside the newly installed DD-WRT firmware, I followed these instructions to set it up as a wireless bridge. http://www.dd-wrt.com/wiki/index.php/Client_Bridged

Besides the speed benefits, I also have a little more security as I can just unplug a single device and all my computers are immediately taken offline. Also going to rest a little easier knowing I don’t have a half dozen wireless signals traveling through my body all night long. 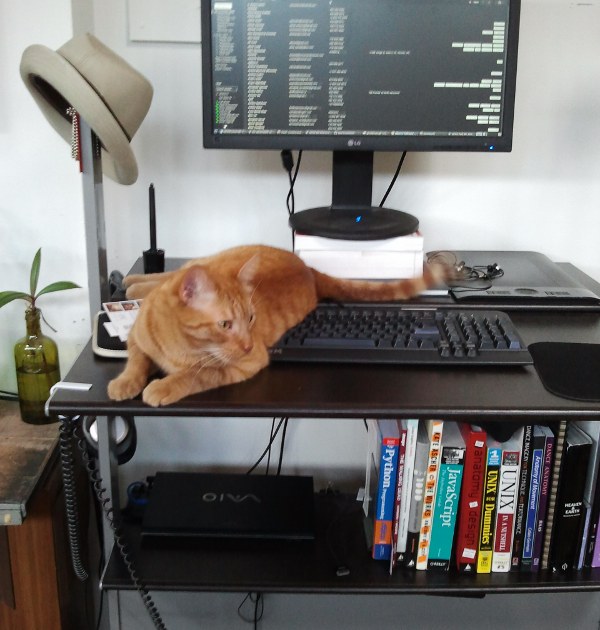 Clearing up loose ends before May begins. April is a major transition period which hopefully ends soon. Standing at my computer all day has become a bit tiresome for my arm and shoulders, but luckily a visitor snuck in the window to remind me to take a break.

“Trouble” demonstrates how actions speak louder than words (and luckily I don’t appear to be allergic to this big guy).

Speaking of “words”, has anyone ever spoke to a porcupine? Do they really sound like this?

Vestax’s new USB DJ controller uses Serato’s “ITCH” for some pretty impressive results. It also looks like an updated VCI-300MKII model has been released. I must get my hands on one… at least to try.

A big concern with more sensitive electronic equipment, is finding the safest way to carry it around. Mostly, looking for something that will help protect the digital knobs. On this Serato forum thread, someone points out this German company (Magma-Bags) that makes carrying bags. Specifically, the DIGI Control-Bag 300 is demoed with the VCI-300.

However, I’ve been thinking about purchasing a piece of foam and just laying the foam on top and slipping it into a large sleeve.  This keeps it more modular, and I could bring the the device alone or slip it into a larger back with my laptop.

One day movies and video games will meet in the middle, just as the boundaries between brains minds and machines will fade. Of course, this assumes we don’t blow ourselves up and out into space.

Wired magazine’s articl on Ray Kurzweil was an informative article on the singularity. Specifically the section entitled “Never Mind the Singularity, Here’s the Science” did a pretty good job in discussing the possibilities and also the unlikelihood that we will see a real-life Ghost In the Shell anytime during our lifetimes. I keep hearing that I need to ready some Vernor Vinge very soon.

Thanks again to Planet Damage for the video link.