Hey YEG, that was a pretty cool open data Hackathon. The potentials demonstrated by the participants in that room had me shivering with excitement. So many useful and brilliantly simple ideas.  The future is bright.

Need some evidence of the potentials of open data? I recommend starting with Jennifer Pahlka’s TED talk on Code for America.

“…platform for people to help themselves and help others.”

At Saturday’s Hackaton, I had the pleasure of meeting some incredible people, super-geeks. I appreciate techs that seem to be almost immune to any technological aversion.

So, back to Saturday’s event…

While at the all-day hacking festival, something was shared with me… and it’s only just now hitting me.

We love this open data. It’s great and more and more of this public/government data is becoming open and available for everyone to plug into.

However, I was told what happens whenever one of these independent volunteers comes up with a great way to present and grant access  to these goldmines of information: The government responds by rebuilding the information tool internally, themselves. This results in the indie project being unsupported, and fading away, unfunded and unappreciated. There’s something about this that doesn’t make sense to me.

It’s not really about “fairness”. It’s about failing to recognize that the idea came from a method. Ideas like this usually grow from a fertile garden of even MORE ideas. It’s about encouraging this open data culture, speeding it’s development. 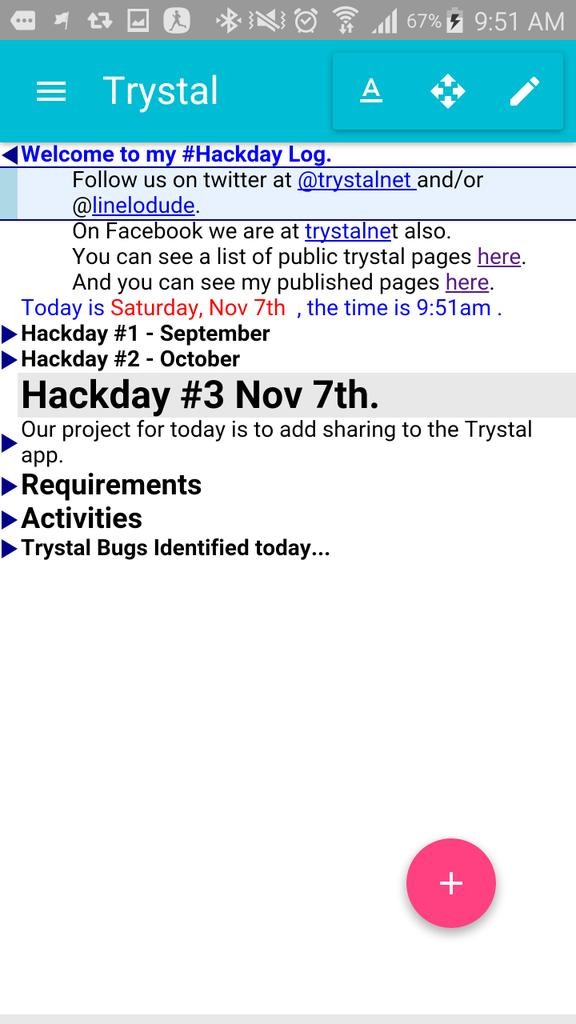 Finally, just wanted to highlight Trystal.net, which is based on the speedy node.js, this text editor is… well…  how does one glorify a text editor? Well, after playing around with it for a bit, I’m pretty excited about the direction it’s going. Document writing in a more procedural fashion. No more scrolling through pages of documents and re-organizing content is super simple with tried and tested keyboard shortcuts. Super efficient document creation / conversion. Looking forward to seeing where Terry takes this.

Don’t take my word for it.  If you are feeling adventurous, create yourself an account and Open file -> my files -> home … then play around a bit after reading some of the docs. It won’t take more than a few minutes to get comfy with this way of document creation.

You may have realized that I’m primarily a Linux user, but this post is for anyone managing files on a Windows computer or server.

I have used SequoiaView for managing file space on Windows servers for almost a decade. This tool allows you to visualize your disk usage by creating boxes that represent files and folders.  The larger the box, the bigger the file.  Colors represent the different file types and can be customized.

If you’re wondering where all your drive space went, this is a priceless tool.

That being said, I’ve been stuck on this tool for years and it was time to see what other tools have become available.  Well, I was happy to find an open source alternative that is properly named Windows Directory Statistics (on SourceForge). 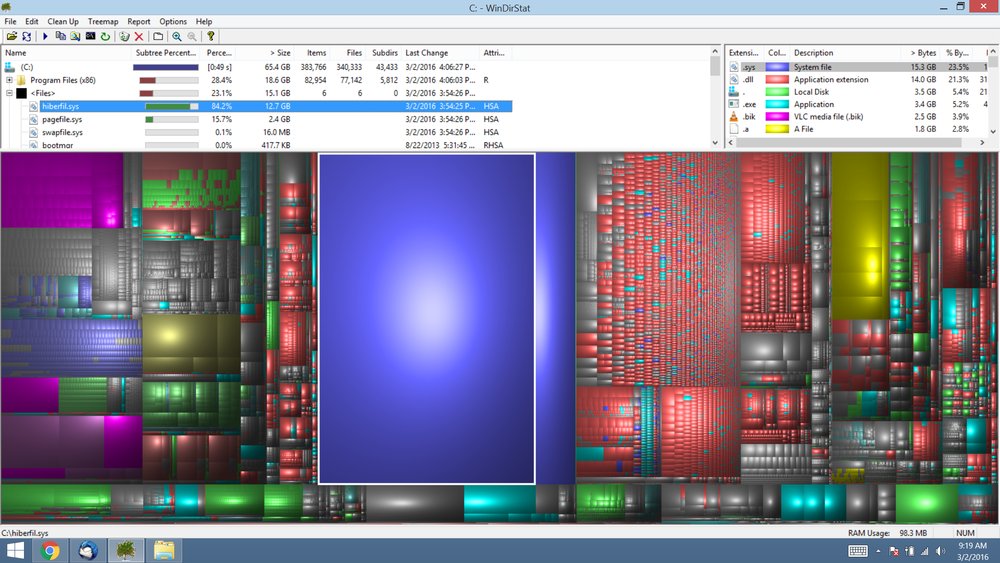 I ran this on my laptop’s Windows partition (dual boot), and saw this massive file taking up WAAAAY too much room.  Selecting the large blue block, I saw that it’s called hyberfil.sys. A quick online search revealed this to be the file that Windows uses when it’s put into Hybernate mode…   which I never use (sparing my SSD the overuse). The online search also revealed a solution on How-To-Geek.

As an administrator, I ran the following command: 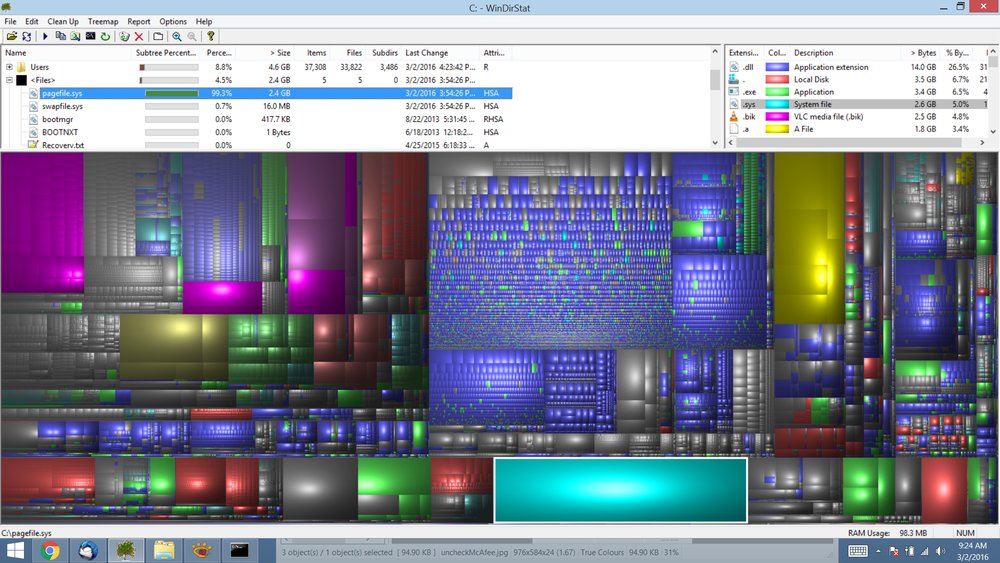 Have fun managing those videos, MP3s and game installation folders.

It sounds like “lightning fast” is just another typical headline for viral Facebook post, which automatically makes me feel as if I’m not giving Vim enough credit.

I typically use basic text when writing on my pc, and I sometimes create light code or html. Since I originally used a Windows machine, I have used Notepad, Context, Notepad++, etc. After moving to Linux, I was usually operating in gedit. It wasn’t until recently till I started shopping for another solution. Since we’re talking about BASIC TEXT, I felt it was pretty critical to choose an open source tool. I don’t like the idea of using a closed source tool in order to help me speak.

I have spent a bit of time looking, testing and reading comment and I think I’ve got a pretty good hold on the text editor options out there. The same names pop up pretty frequently… though one editor has always stood out as being a legend in this area, though it does not have a GUI. Vi or Vim.

I’m a big fan of not having to jump onto the mouse constantly, especially after realizing the RSI that the mouse was causing me.

What is Vim? Alan Thomas does a great job of introducing Vim and looks at it through the lens of “sentences”, comparing the keystrokes to nouns, verbs, etc. He also includes some great example uses.

So now the learning begins. This experience is much like when I had to force myself to touch type. I was slower at typing for a few days, but after 3 days of practice, I was almost twice as fast of a typist as I was before I touch-typed. Initial investment is pretty low compared to the benefits!

First step was to force myself to get comfortable in using hjkl in order to navigate around the page. The first 3 levels of VIM Adventure helped with that.

Why learn Vim?
Best way to master
Is it worth the effort?
7 reasons Vim is your text editor

More Interactive Ways To Learn
OpenVim’s tutorial
Sitting at a Linux computer and want muscle memory to assist your text editing? As Alan reminds us, just type this in a terminal window:
vimtutor

From WordPress to Drupal?

WordPress WordPress WordPress…  is all I’ve been thinking about for a few years now. BUT, now I’m learning how much of a pain in the @ss it is (for me) to customize the look of my site. Last night I was up till 3am researching Drupal.  Looking at this list of site created on Drupal…  it sounds like a rabbit hole that I think I want to jump into, starting with setting up a LAMP server at home, then heading over to this tutorial, while keeping Acquia in mind for potential support. 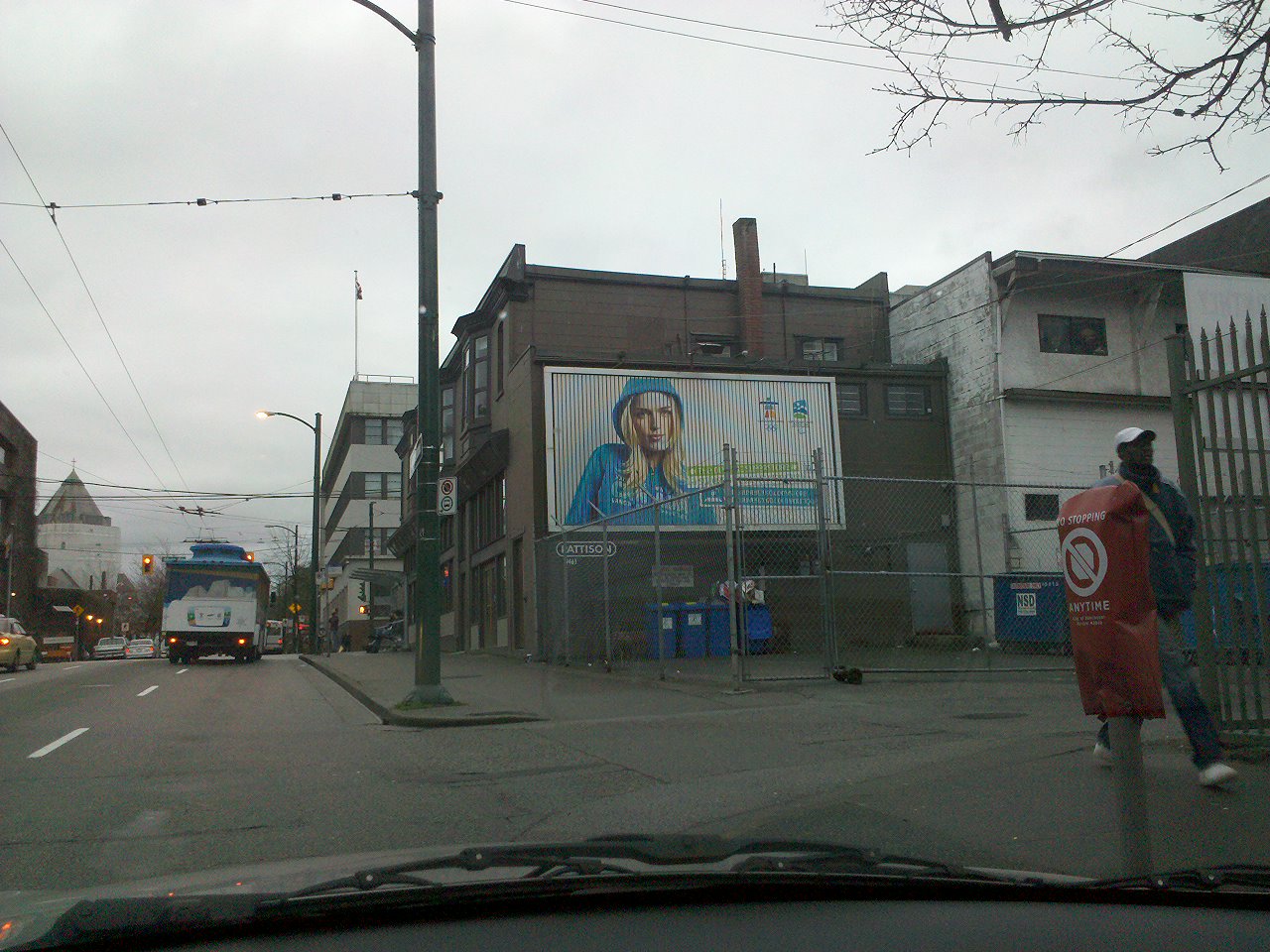