Have you tried it yet? Imagine booting from a USB stick and being able to test drive Linux. Without even having to install Ubuntu Linux, I was able to connect to my local library’s WiFi, read my Gmail and use my Wacom tablet. I then double-clicked the “Install Ubuntu” icon that was sitting on my desktop and let the installer run in the background…   as I continued to browse the internet.  If you haven’t yet, I recommend trying it.

I’m not a big fan of the Unity user interface, which is the default UI for recent versions of Ubuntu. However, installing Gnome Classic was stupid easy *clicks button*. This style of UI is more comfortable for most users.

Next, I’m testing out the graphics card using the Sintel character rig in Blender.  All looks good, and we’re mobile!

Oh yeah… isn’t this supposed to be about Blender?

To finish off the day, I felt I should actually create something…  anything. Why not follow a geeky trend on 3/14 and pay tribute to Pi?  I followed this tutorial and was able to being in an SVG file to extrude in to a 3D shape.  Not incredibly impressive, but for those that are spooked out about 3D softwares…   well, I say, “Ave no fear!  Iz EZ!” 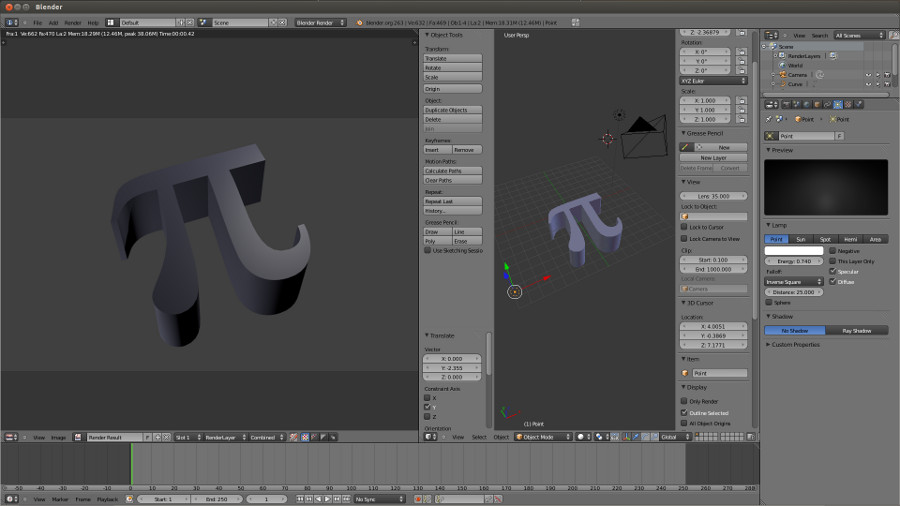