First question that most have is,

“What is open source? You mean free?”

Open source means that not only are you given the product, but you are given the blueprints as well. If you need to make changes, you have the ability to go in and change the software yourself (or find someone to do it for you). Thousands of copies/variations are out there floating on the Internet. Some flavours are simplified, some complicated, all are customized to various degrees. This means that even if you loose your copy of the product, another copy can always be found…    somewhere.

NO ONE SHOULD BE ABLE TO  TAKE AWAY YOUR TOOLS.

Web developers are very familiar with this concept, as may of their tools are open source. Some may use commercial software but, in the end, the media itself is open source. You only really need a text editor to do most everything for the web.

Some common things I hear whenever I mention Linux, Gimp, Blender or virtually anything that is open source:

“Because it’s free, it must not have powerful features.”

Over the past 6 years I have probably spent $15,000 on software. I own licenses to multiple versions of Photoshop, yet I still use GIMP because it loads super fast and I can install it on all my computers, or any machine I come to contact with (yes, it was me who installed it on your PC). There’s an unbelievable amount of online support from all over the world, and more tutorials than anyone could ever ask for.

“Linux is complex and the interfaces are confusing.”

Most open source software, in the beginning, can be pretty crude. That being said, most of my multimedia applications have been around for a decade or two, and most of this software is pretty finely polished nowadays. All the open source applications I use are MUCH simpler than the commercial counterparts. In many cases, this simplicity was the primary reason I migrated to many of the free tools. As an example, look at how effectively Blender lets me scale the entire interface. I’ve personally never seen something like this. As for Linux being crude, take a look a this UI demo.

“Gimp, Blender and other open software is buggy.”

I honestly don’t see a difference, though if someone twisted my arm… I would say that commercial software tends to crash more on me that the open source counterparts.  This could be due to the fact that most of my commercial software is on Windows (sorry Microsoft) and that Linux is known to be more stable and recover well from crashes.  Problems are bound to happen and, because open source can be altered, problems are never true show-stoppers. You are probably not alone if you are having trouble, so the answer is almost always already out there to be discovered.

“No professionals use open source software.”

Take a look at the following image. 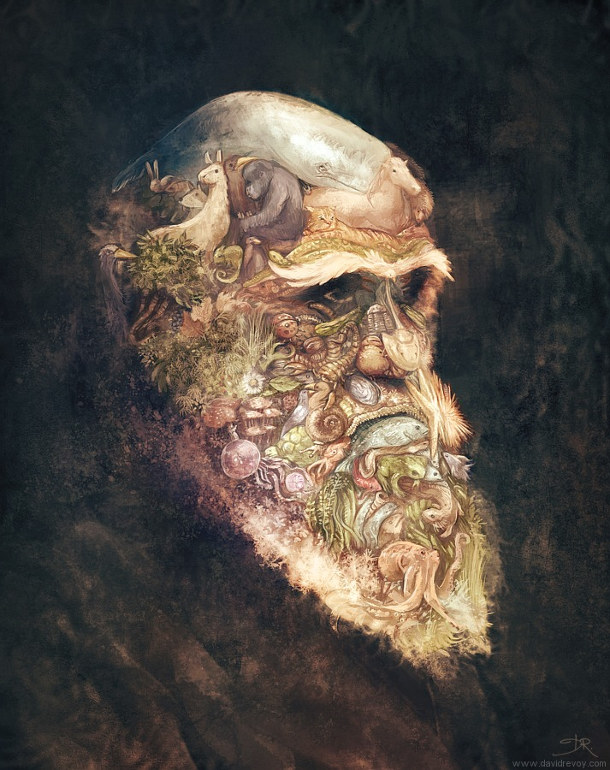 This was created by David Revoy, an artist that has been using open source software for 100% of his work. He uses GIMP, Krita, MyPaint, Blender, all running under Linux. While it used to be a pain to find compatible hardware for Linux…   it’s pretty simple nowadays. Personally, I find that nearly all my devices (including my Wacom drawing tablet) were working without having to download or setup drivers. Real *cough* plug-n-play.

David shares why he chose to go to open source, back in 2009.

Am I happy about this personal choice ? Yes 🙂 and I can without any remorse put my old software license in a box for long term storage, just to show to my ( hypothetic and not yet existing )  grant-children what were …. the proprietary 2D software I started with.

To become more familiar with David Revoy’s work, I highly recommend purchasing his “Chaos and Evolutions” DVD.  If you can’t afford the purchase right now, he’s made the video available on Youtube. He’s using some of the software mentioned above, including Alchemy (tool that Android Jones assisted the develop of).

As I mentioned before, I’ve easily spent $15,000+ on software over the past 6 years (since going independent). I’m putting energy into open source tools because of my own personal issues with licensing commercial software, as well as issues I’ve witnessed my clients struggling with.

I am not saying that commercial software isn’t needed, I’m just saying that it should not be the foundation of a creative production. If the core of a project is open source, this means that all the base products will be available to everyone on the project. If animators want to do a bit of audio testing with their animations, they have Audacity to do some light sound editing of their own.  If a project manager wants to make some slick diagrams in Inkscape, a tool is available to them without spending a few hundred on Adobe Illustrator.

Please keep in mind.  These software are not trying to clone commercial software applications. They have developed and grown over the years, based on feedback from users all around the world. There’s always a learning curve but, like when you learned touch-typing, you’ll be zipping along faster than before, once you get over the initial hump.

Not convinced? Perhaps you have preconceptions based on what you saw 5-6 years ago.  Well, I’m here to tell you that times have changed. Checkout Vimeo and Youtube for some tutorials and you’ll be amazed at what you find. If you’re fortunate enough, perhaps the Vimeo video has a “Download” option available. If that’s the case, then you can save a local copy and watch the video in VLC, where you can use the “[” and “]” keys to control the speed of the tutorial.  I typically run at 130-150% of normal speed.  😉

If you’ve got your checkbook out, you might want to support the current Krita Kickstarter. They’re planning on adding animation functionality, amongst other features.

Realizing that this resume template that I’ve been using for over a decade now is a bit out of date, I’m rebuilding it from scratch using responsive design techniques.

Almost completed with the base content and design. Just started the creation of the icons.

This tutorial helped me figure out masks and clips in Inkscape, using tiled object.  Just what I was looking for!